For a couple of weeks before, all forecasts indicated that summer 2019 would end on the 28th September. That was a gloriously warm and sunny day. And true enough, Sunday 29th began wet, gloomy and chilly. Autumn was here.

It has rained most days since, drowning any hopes of a late Indian summer, like the ones we have enjoyed for the last few years. You could even argue that normal order has been restored.

Anyway, one thing that autumn brings that I enjoy, whatever the weather, is wonderful views of migrating birds. I follow and support a couple of Osprey projects in Wales and it is always fascinating watching the chicks grow, fledge and finally leave – always after the female and before the male. I’ve never seen one pass over my patch though, but an unringed female always stops off at a local lake as she heads south. Last year a juvenile refuelled there too but when I visited it was so far off that its identifying ring was unreadable.

That was the day I snapped this Flyer – a male Mute Swan. 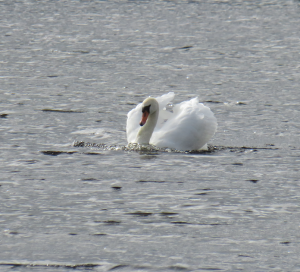 This boy was on a mission! Seriously motoring, pushing a bow wave, his posture pure aggression. His target a – cygnet which had carelessly swum into his territory. Fortunately, the cygnet eventually found refuge in the reeds but it was a pretty close call.

Last time I wrote, I said that I would soon be publishing the follow up to Kill TIM. Well, it is on its way. Just not yet.

In the last few weeks I’ve done a tonne of research for The Unseen Farmer. I’m finished with active researching now – it is so easy to do too much. But, I do like to learn new things. It’s fun, and you never know if or when some stumbled upon fact will come in handy as you craft a story.

One such recently found random fact is that apparently the human brain cannot create human faces. I didn’t know that, did you? So, should you ever see a face you do not recognise in a dream, you must have actually seem that face, even for a split second, at some time in your life. Fascinating. Who knows if this will show up in TUF or another work. One thing’s for certain though…you will just have to keep tuning in to find out!